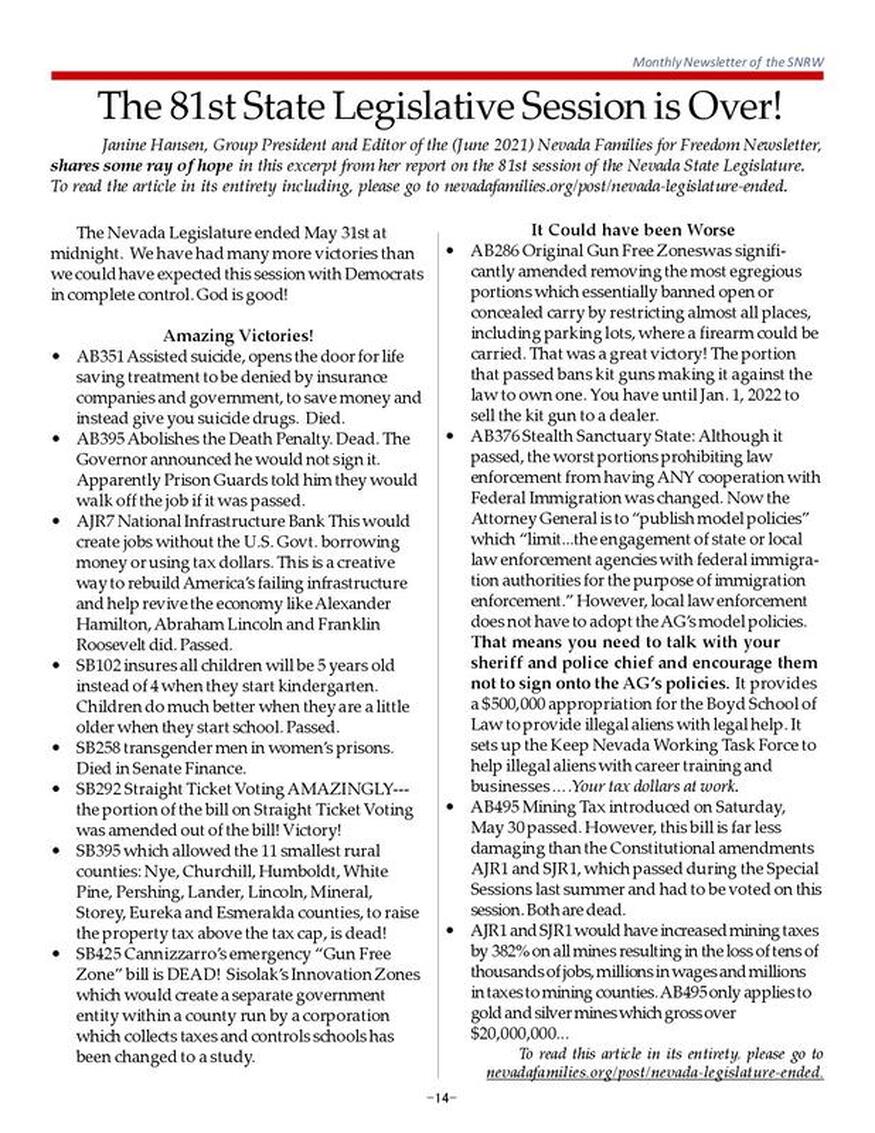 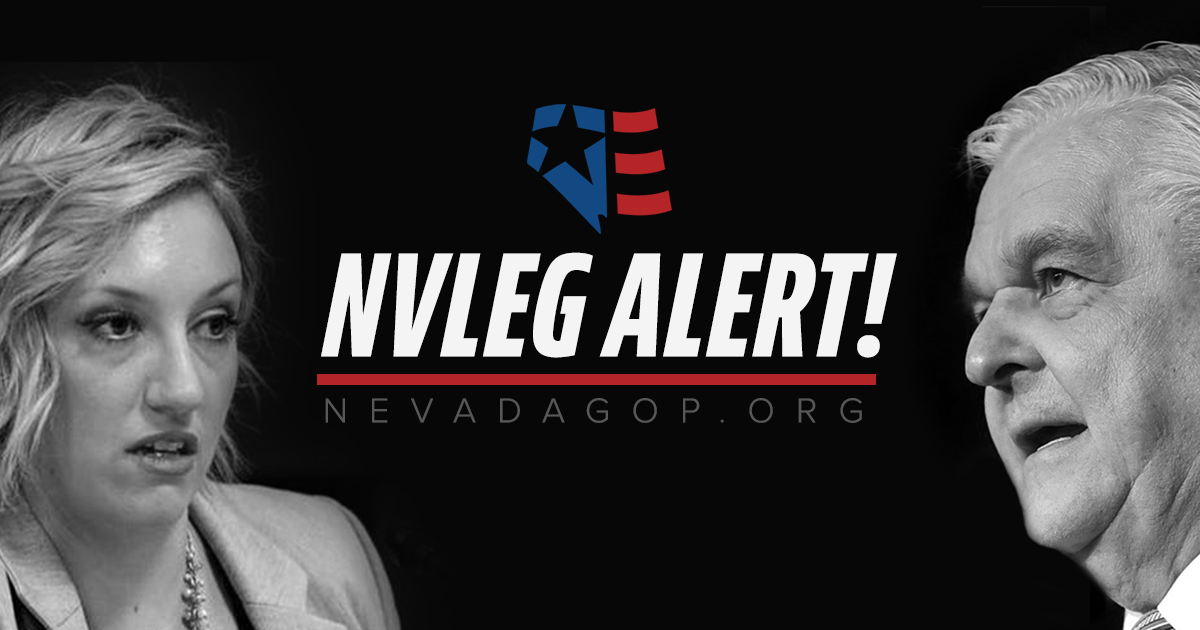 The 81st Legislative Session has been the most partisan session in recent years. Democrats have worked diligently to erode our 2A Rights, degrade our elections, and much more. With the final day rapidly approaching on May 31st, we are asking you to help us with our final stand and to contact Governor Sisolak and demand that he VETO the following bills that are passed this weekend:

AB 321: Makes universal mail voting and ballot harvesting permanent. This bill would ensure that voting irregularities, ballot harvesting, and all the issues we saw in the 2020 elections would continue. It would also cost millions of dollars to facilitate.

AB 126: Takes away the rights of political parties to determine how they will select their nominee for President by mandating that the nominee will be chosen in a separate Presidential Primary Election. This accelerates the timeline of the primaries in Nevada which could conflict and penalize our political parties on a National scale. Implementation of this bill will cost Nevada's taxpayers.

SB 292: enables straight-ticket voting here in Nevada. Straight-ticket voting allows voters to choose a party’s ENTIRE slate of candidates with just a single ballot mark. It discourages voter engagement and informed voting. Informed voters help improve the election process and ensure that the best candidate is elected to represent the concerns they have, an aspect of elected office Democrats in the Legislature HATE.

This bill requires the State of Nevada to hold a special primary election in place of the internal party nominating process to fill. That means two complete elections to fill a single vacancy. We don't even know the expense of that because the Secretary of State declined to give an estimate on a "vacancy which may or may not occur". Accordingly, the fiscal notes for this bill are understated by millions of dollars. It also removes important NRS that Governs the rights of political parties.

AB 432:  Expanding automatic voter registration to 15 other state agencies and 32 tribal locations. Automatic Voter Registration (AVR) has been plagued with issues, as we saw during the election when over 60,000 voters were put into provisional status in Clark County alone. Many of these voters thought they had registered via the DMV, and yet their vote was put in jeopardy at the polling place. It is the height of folly to expand an imperfect program. Rather than increasing the uncertainty in our election process, the Legislature should be fixing the process and imposing penalties for systems failing.

SB 452: This bill essentially negates the Right to Carry a Concealed Weapon (permit) and to open carry a weapon in almost every public space. Currently, you are not permitted to carry in a school, child care facility, on premises of the System of Higher Education, or in a public building that has a metal detector. NRS202.3673.

SB 420: Sponsored by Democrat Senate Majority Leader Nicole Cannizzaro. This bill creates a government-run public option in the state of Nevada which will cost Nevadans $77 Million in its first two years, and nearly $200 million in the following two years. According to the legislature’s own fiscal notes, the ongoing costs will be tens of millions of dollars every year after that.

Democrat Leadership in the Legislature think that because they control the Governor’s Mansion they can pass all of these detrimental bills without pushback. We have one last chance to use our strength in numbers to VETO these bills. Contact Governor Sisolak here and tell him to stop the madness.

As a concerned citizen, I implore that you VETO SB 452.

This bill essentially negates the Right to Carry a Concealed Weapon (permit) and to open carry a weapon in almost every public space. Currently, you are not permitted to carry in a school, child care facility, on premises of the System of Higher Education, or in a public building that has a metal detector. NRS202.3673.

Update AB376 passed Committee
AB376 Horrible Sanctuary State for Illegal Aliens
The hearing was held on AB376 this morning. Law enforcement including the Las Vegas Metro Police, the Nevada Sheriffs and Chiefs Association and the Washoe County Sheriff testified against AB376 saying, by tying the hands of law enforcement that our communities would be less safe. They expressed concerned that even in the case of terrorists law enforcement would be unable to communicate with Federal Law Enforcement harming public safety. Law enforcement raised significant concerns and clearly opposed AB376 confirming our concerns about AB376 creating a Sanctuary State for Illegal Aliens in Nevada. There were 15 people who testified in opposition to AB376 taking the 30 minutes allotted.
The Committee then voted, with no consideration of law enforcement’s concerns, and passed AB376 out of the committee on a party line vote of 8 to 5.

Share your Opinion: https://www.leg.state.nv.us/App/Opinions/81st2021/
There are only 160 people who have posted their opinion against AB376 and 373 who favor the bill. PLEASE POST YOUR OPINION.

If you have not called Speaker Frierson please call and leave message. He can determine as Speaker whether or not to place AB376 for a vote in the whole Assembly.

MESSAGE: Vote NO on AB376 which makes Nevada a Sanctuary State for illegal aliens. This law prohibits state and local law enforcement from cooperating in the enforcement of our laws on illegal immigration. It also creates a deceptively named “Task Force to Keep Nevada Working”. What about legal citizens of Nevada who are out of work who have lost their jobs and businesses during this emergency? 62% of households headed by illegal immigrants used one or more welfare programs. Nevada Taxpayers have to pick up the cost. Oppose AB376.

EXPLANATION OF AB376 has the deceptive name of “Keep Nevada Working Act”. It has nothing to do with Nevadans working, but is all about prohibiting law enforcement from enforcing immigration laws creating Nevada as a Sanctuary State. A state or local law enforcement agency SHALL NOT inquire into or collect information relating to the immigration or citizenship status of a person or the place of birth of the person…and SHALL NOT provide federal immigration authorities with…information. State or local law enforcement, before making an inquiry, “warn the person that any statement made about his or her immigration or citizenship status or place of birth may be shared with federal immigration authorities and possibly used in federal proceeding for deportation or removal of the person,” etc.
State or local law enforcement shall not detain a person solely for determining immigration status unless accompanied by a warrant which is based upon probable cause issued by a federal judge or magistrate because the person has committed a crime. State and local law enforcement SHALL NOT permit a federal immigration authority to interview a person about a noncriminal matter while the person is in custody.
Prohibits any agency to use funds, facilities, property, equipment or personnel to investigate, enforce, cooperate with or assist in the investigation or enforcement of any federal registration or program or any other law, rule or policy that targets people based on ..immigration status or citizenship.
AB376 sets up the “Keep Nevada Working Task Force” within the Office for New Americans (created last session to help illegal immigrants). The Task Force will be made up of illegal alien friendlies including: Immigrant advocacy groups, labor organizations, a legal interest of immigrants, faith based non-profit, an advocacy group which focuses on immigration and criminal justice, and others. The Task Force is to develop strategies with private sector business, labor organizations and immigrant advocacy groups to strengthen industries across the state, strengthening career pathways for illegals, improve the ability of this sate to attract and retain immigrant business owners. Your tax dollars at work.
The Preamble of the bill claims that “immigrants” make up 19 percent of the population accounting for one in every four workers. AB376 is in recognition of the significant contributions of immigrants (illegals) to the overall prosperity and strength of this State, creating a compelling interest in ensuring that this State remains a place where the rights and dignity of all residents (including illegal immigrants) are protected.
It says school & campus police “shall not inquire into or collect information concerning the immigration or citizenship status of a person; or place of birth of a person or provide information.
According to the Center for Immigration Studies 62% of households headed by illegal immigrants used one or more welfare programs…and there is a child present in 86% of illegal immigrant households using welfare, and this is the primary way that these household access programs.” http://cis.org/Welfare-Use-Legal-Illegal-Immigrant-Households
“FAIR estimates that the annual fiscal burden on Nevada taxpayers associated with illegal immigration to be about $630 million (in 2008). This equates to an annual average cost of about $763 per native-born headed household in the state. In addition, there is a cost to the state’s economy resulting from remittances sent abroad that amounted to $618 million in 2006. From 2004 to 2006 remittance flow increased 38%. Estimated taxes collected from the illegal alien population are about $216 million.”